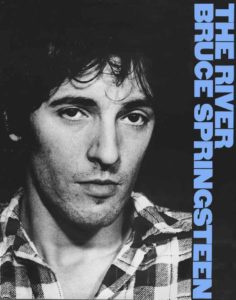 The first time I saw The Boss he was the River Tour performing at Chicago’s Uptown theater on October 10, 1980,  and it was outstanding. Sixth row, center seats and from what I understand the only way to get closer was to be in a wheelchair. At that point in my life I was not at all familiar with Mr. Springsteen or his music but I was dating someone that was a huge fan.

This guy actually made me prep for the concert. First he lent me the words and I had to “study” them to get knowledgeable. This was followed by a test that involved him reciting words and me announcing what song and album they were from and once I “passed” I was actually handed the albums so I could finally hear the music. Thunder Road was the only song I actually memorized in its entirety at that time because it was hard to hold down a full time job, have an active social life, and study for a concert.

There were four of us, we were young and we were headed to Chicago, we were going to see Bruce and we were going to stay in a hotel and it was going to be amazing. And only the young would be ignorant enough not to make hotel arrangements prior to the concert. We ended up spending the night in one of those rooms that rent by the hour that looked like a CSI crime scene but I didn’t care because that night I was twenty years old and I was in Chicago at the same time as Bruce Springsteen. I was not about to let a few cockroaches and a bunch of used condoms stuck to the bottom of a waste can ruin my night. I am jumping ahead of myself here because the crappy hotel came after the concert.

Day of the concert, and I was sick. Really sick, like 103 degree fever sick. The kind of where you can feel your nose hair follicles. But I went and it was amazing. The boys found the place where the concert was and pulled up to drop off the girls. We held our tickets tight in our hands and carried no purses because, after all, this was Chicago. We all had on our Springsteen Concert Tour shirts (I still have mine), Levi Jeans, braided leather belts, and Chukka Boots and an obligatory red bandanna with each of us wearing it in a different spot. We looked like everyone else that night, but we were so small town. Anyway, we pull up on the opposite side of the street from the theater’s entrance just as in time to witness the following:

A giant Cadillac with huge doors parked in front of the theater directly across from us. Slowly someone opens the driver’s side rear door and along comes another car very fast and hits that door right off the hinges. The door literally bounced down the street. I’ve never seen anything like it. The driver that hit the door kept right on going and the door just kept bouncing and we got the hell out of there.

We were good kids and we knew we just broke the law because we witnessed an accident and didn’t stay at the scene. Nor did we report the accident. We felt like we were living the best Springsteen song ever, young good kids that were led astray by bending the rules just a little more and more each time until we can’t tell right from wrong and we are sent to a steel mill to work and while we work we reflect on what we know now was the glory days back then. Now keep in mind that I am delirious from my fever and now had to walk about nineteen blocks to get back to the theater. But this would be good because when the concert was over we would be walking straight into Hotel Hell.

If you have ever seen Springsteen before he does a song he talks a little bit about it. Real soft, he describes why he wrote what he wrote and how he felt when he wrote it. Meanwhile he is picking his guitar slow, soft, seductive.

As he is picking and speaking, I became lulled into a fever-induced slumber and was awoken each and every time by Clarence’s saxophone tempo rising quickly and once again I’d be jolted by a guitar spasm I would hop to me feet with everyone else and no one was the wiser.

Until the song Point Blank. It is a little slower, so as he talked and picked he went right into the song with my startle reaction. The crowd sat for this song, I imagine their heads were swaying in rhythm with the ballad but I don’t know because I was semi-conscious. When Bruce cries out “Point Blank, right between the eyes” Max Weinberg does this big BANG on the drums. Classic excellence.

Anyway, I am in my fever-induced dream state, can’t get that car accident scenario out of my head, realizing I am on the run from the law, I am twenty and wanted by the feds and when Max did the drum thing it fit in with my dream and I thought I got shot. I flew out of my seat and yelled “NOOOOOOOOOOOO” and at that point everyone else got up and started yelling “YOOOOOOOOO” and “WHOO HOO” and “BRUCE”. After that, the rest of the concert was a blur and the next thing I know my friends were filling their bandannas with ice cubes from their soda cups and applying makeshift compresses to my forehead and pressure points.

The concert closed with an blow-the-roof-off-this-mother version of Born to Run and the crowds departed and we trekked the nineteen blocks back to the Inn where I saw my first pimp, a hooker, and a john.

Now, I’ve seen Springsteen again since then, it was the Human Touch/Lucky Town tour. We were in Milwaukee, it was election day and Bruce announced that Bill Clinton would once again be our president. That concert was not anywhere near as much fun.

But then, you always remember your first.

I’ve got the words to Thunder Road right here, if you want to raise your lighter and sing along, well that’s alright with me. This video is actually from his River Tour, not filmed in Chicago but filmed about six weeks later in Maryland.

You can hide ‘neath your covers
And study your pain
Make crosses from your lovers
Throw roses in the rain
Waste your summer praying in vain
For a savior to rise from these streets
Well now I’m no hero
That’s understood
All the redemption I can offer girl
Is beneath this dirty hood
With a chance to make it good somehow
Hey what else can we do now ?
Except roll down the window
And let the wind blow
Back your hair
Well the night’s busting open
These two lanes will take us anywhere
We got one last chance to make it real
To trade in these wings on some wheels
Climb in back
Heaven’s waiting on down the tracks
Oh-oh come take my hand
We’re riding out tonight to case the promised land
Oh-oh Thunder Road oh Thunder Road
Lying out there like a killer in the sun
Hey I know it’s late we can make it if we run
Oh Thunder Road sit tight take hold
Thunder Road

This site uses Akismet to reduce spam. Learn how your comment data is processed.